How do I become a member of the Victor F. Lawson Society?

The Victor F. Lawson Society honors those whose lifetime personal giving to Chicago Commons is greater than or equal to $25,000. Membership to this society is achieved through monetary donations that may include cash, stock transfers, in-kind gifts, family foundations, and/or donor-advised funds. 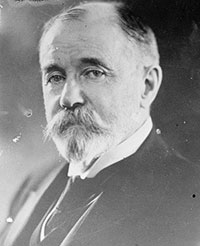 Who is Victor F. Lawson?
Victor F. Lawson served on the board of Chicago Commons in its early years and owned and operated the Chicago Daily News for nearly 50 years. He believed strongly in the settlement house philosophy and was an ardent supporter and defender of Chicago Commons’ Founder Graham Taylor and supported the organization until his death in 1925. Mr. Lawson was a progressive yet modest philanthropist who invested in systemic reforms that would lift up communities as well as move Chicago forward economically. With Mr. Lawson’s financial support, Chicago Commons expanded programming, moved into a larger facility, and founded the Institute of Social Science and Arts – now University of Chicago’s School of Social Service Administration. He also provided editorial space in his paper weekly for Graham Taylor to advocate for the needs of working-class Chicago.